Who is the fairest of them all?  Well not me that’s for sure, but that’s ok and here’s why…


I’m going to go off on a tangent for a sec, but just bear with me for a while. Recently my television viewing has included episodes of ‘Body Fixers’ (E4) and ‘Celeb Botched Bodies’ (C5) (usually it’s ‘Game of Thrones’ and ‘The Walking Dead’ but hey, we’re in between seasons!).


It constantly winds me up that some people in the public eye become obsessed over some teeny tiny imperfection and then actually have a risky operation to try and fix it which ends in one of two ways:


1.       They then notice another imperfection that needs fixing leading to more surgery resulting in more risks and a never-ending pursuit of unobtainable perfection.


I always think WHY? Why are they doing this to themselves when they are (well mostly) pretty and talented enough to have drawn the spotlight towards themselves anyway. Is it due to peer/media/social pressure?  I mean I’ve read enough to know that being famous can sometimes mean a lot more than just acting or singing it can mean total invasion of your private life (arguably if you let it, not every famous person has their life on display) and also high profile criticism of the way they look or bullying remarks about a particular feature.  The cyber trolls or even just plain old fear of aging and showing those dreaded wrinkles will force people under the knife.


So, what business is this of mine and why does it annoy me so much??


Well I guess it really is none of my business.  Even if these modified human faces are everywhere (and not in a cool Persona Synth way either!).  If people want to change themselves and have the crazy amounts of money they need to do it, then it’s their life and their decision.


This annoys me because there are so many people out there that are scarred and loose limbs through attacks, accidents and fighting for others and the things that they believe in.  So many people that develop life threatening illnesses and so many people that are born with life limiting deformities and disabilities (me included).  NONE of these people chose to be that way and probably wish with all their heart that it would change. But it doesn’t.  And it can’t.  And the people with bodies that work and look how they should continue to butcher themselves and risk their lives and waste their money all for the purpose of trying to make themselves happy.  They won’t…ever.

Having a visible disability, for me, means that as well as having a (depressingly long) list of stuff I can't do, when people meet me it can go one of three ways:


1.       People assume my disability affects my mental capacity and either talk to me as if I am a child or totally ignore me to try and avoid their awkwardness/embarrassment or speak to those around, about me, despite me being present (‘How is she?’ GGGRRR)


2.       People are over-eager to prove they are okay with my being disabled by noticeably making a point of saying hello and starting a conversation about the one and only topic they believe I am interested in (WTAF!) This is usually the time that they temporarily hurt themselves and had to use a wheelchair/crutches/stick (and maybe said person will raise their voice so that others will notice their benevolence).  These people have good intentions and I would never be rude, although I really want to and they will probably get an eye roll from me when they have gone!


3.       People treat me as they would any other person, see me as a person and not just my manky outsides.


(Meeting people from category 3 can be rare so when you make a friend like this, recognise it and hang on to them!)


It took me a very long time to come to terms with, accept myself and be ok with me being completely physically imperfect and my constantly changing degeneration.


It took me so long to personally accept my body as it is because it took me a long time to accept the fact that all of my physical problems are completely beyond my control.  I do not have the ability to change anything and no amount of money will cure me (well, more money would make things easier by allowing me to afford better equipment etc. but that is a different blogging subject!).


Once I made peace with my physical self (I mean everything still sucks but I will never stop trying) I felt as if I could cope with life in a better way, be kinder to others and try to positively influence those around me.  I still get MAJOR confidence wobbles, frequently, but it always passes.


Look I know that sounds like crazy, optimistic, unrealistic drivel.  I can even hear how sickeningly false it sounds as I reread it.  For me it is true though.


The true legend that is Roald Dahl wrote this in his book ‘The Twits’: 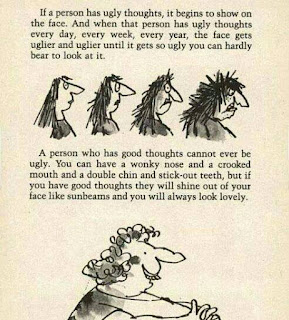 I think that sums up the subject nicely. Just be a good person.

Now when does TWD start?

(in reference to my earlier blog submissions: a haircut does NOT count as a body modification. Tattoo's are a permanent form of body modification but the tattooing procedure is not a risky operation, which I suppose is why programs like 'Tattoo Fixers' exist!  Always think before you ink!)
Posted by Pom at 04:17