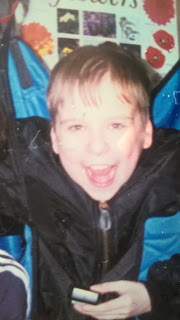 I met Daniel when he was 11 and I was 14.  We shared a taxi together to school which was about a half hour drive away.  We were both disabled but with completely different disabilities.  Daniel had Cystic Fibrosis (CF link) and it was the horrible complications of this condition that led to his death, way too soon.


I remember that he missed the first day of school because the taxi driver couldn’t find the correct house.  On the second morning, he found the house and I just remember this cocky, skinny boy with one earring and a plaster cast on his arm sitting next to me in the backseat.  The plaster cast had nothing to with his disability, but I can’t remember if he ever told me how he broke it.


Because of the journey to school every morning we both went to stay at ‘the bungalow’, kind of like a very small care home for some of the disabled students to stay Monday to Friday.  Home at the weekends, so Daniel and I still had many journeys together.


Next year it will be 20 years since Daniel died. Right now, he would’ve been 33.  I will never know what kind of adult he would’ve been, what he would’ve looked like, whether he would’ve had a family, what his career would’ve been or even whether we would still be friends (of course we would though!!) and I still miss him.  Now Daniel’s photo lives on my windowsill where it has for 20 years. My nephews have seen the picture and know his name, his memory still lives.  It makes me smile because he looks happy.  CF is a very debilitating condition but Daniel still found the time to be happy, we can all learn from that I think.


I have many memories of Daniel.  Sometimes I think I knew that he was going to leave too soon so I committed a lot to memory while he was alive so I could cherish my thoughts later.  Truth is though, Daniel is unforgettable.


Here are some of my best memories:


·         When Daniel snuck into the staff bedroom and then paraded around wearing one of the ladies’ nighties.  He didn’t get told off because even they were too busy laughing!


·         The smell of the medicine from his ventilator that followed him around like his own personal brand of aftershave (although he was never old enough to shave).  Oddly I found it comforting.


·         Telling the Taxi driver that Daniel had died and watching him cry.


·         When Daniel told me that it was better not to be skinny cos hugging skinny girls was awkward and bony.  He called me squidgy babe.  It was sweet at the time and made me feel less of a freak.  If anyone called me that now, I would lamp them.


·         The time when we were watching TV and a newsreader said that people with CF are likely to die before they are 25. Daniel looked at me and said ‘sod that, I ain’t dying’.


·         The bright orange dress that Daniels mum wore to his funeral because he had said she looked nice in it.


·         When he rang me at home one weekend to tell me that there were fire engines and police cars in his street.  I hardly ever had a friend ring me cos no one had mobile phones then!


·         Daniel’s black and white shirt he thought looked cool and would wear all the time.


·         When he visited my home, declared that my dad was cool for using a swear word in front of him (wrong on so many levels) and played with our new kittens, Ren and Stimpy.